During our first week of 2020, Scoil Mhuire received a visit from a group of fascinating people. On the 9th of January, sixth year English classes, TY Young Social Innovators and a group of junior climate ambassadors gathered tightly in the study hall to welcome John Lynam, the Consul General of Ireland in Frankfurt, Lieutenant Claire Foley and Corporal Kieran McGeogh. They had come to Trim as part of a project called ‘Global Ireland’ and the hour-long presentation from these public servants was worthwhile and informative.

Global Ireland- Ireland’s global footprint to 2025
‘Global Ireland’ is an initiative set up in 2018 by our Taoiseach, Leo Varadkar, in which the government aims to set up new embassies and consulates in places such as Chile, Jordan and Vancouver. The objective of this project is also to make Irish people aware of the work that the embassies and defence forces carry out. People like the visitors we had in Scoil Mhuire are sent out to schools all over the country. So far approximately 80 schools in Ireland have been visited by ambassadors, consuls and members of the peacekeeping forces. The Irish government aim to reach these goals by 2025 in the hope that it will expand Ireland’s international presence throughout the globe.

Consul General of Ireland in Frankfurt
Many of the public servants sent out to speak to and inform students have a personal connection to the school or area. Consequently John Lynam found himself in Trim in the early days of the new year. John is originally from Trim and lived on the Athboy Road. He went to secondary school in the town and his sister went to Scoil Mhuire, just like all of us. He completed his Leaving Cert in 1997 and studied both French and German, which he said has benefitted him greatly on his travels around the world. After graduating, he went to Galway and obtained a degree in Economics and German. He continued on to Limerick where he studied for his Masters and he also spent some time studying in Brussels.

John joined the Department of Foreign Affairs in 2002 and has travelled to an extraordinary list of places- Brussels, Geneva, New York, Uganda, Shanghai! He then worked in Limerick for four year, which isn’t as exciting. He currently holds the role of Consul General as part of a new mission in Frankfurt. Now, you may be wondering what are the Department of Foreign Affairs’ roles and what does a consul do? Well John revealed all the answers to us:
• The Department of Foreign Affairs issue the passports that most Irish people possess. Last year they issued 900,000 Irish passports. A large amount of these were for people from the north who are preparing for Brexit next month.
• This department also represent Ireland’s interests overseas. For example, they are attempting to gain membership of the UN security council next year.
• They promote Irish culture abroad and support Irish communities in countries like Australia and America.

Members from the UN peacekeeping forces
After the Consul General finished speaking, Claire Foley and Kieran McGeogh stepped up in their khaki green army uniforms to reveal to us what being a member of the Irish Army is like. Most of our students, including myself, were caught by surprise when everyone in the room was asked repeatedly to stand up and sit down – to give us an insight into the intense training involved. Perhaps we were lucky they didn’t ask us to do sit ups!
Claire Foley started off the presentation and she, like John, had a connection to the local area- she is from Slane and was a Mercy girl, just like all of us sitting in the room. Claire didn’t join the forces until 2017. She worked in Public Relations for years before and then made the decision to train as a cadet. She trained in the Curragh for 16 months where she learned leadership and decision-making skills, as well as how to use weapons. Claire recently visited Amsterdam as part of the gender equality programme and is currently a Lieutenant in Dundalk. Later in 2020, she will be working in post-conflict areas.
Kieran then spoke about himself and his background. He remembered the exact date he joined the forces- the 19th of May 2001. He has worked in Dundalk and Rathmines Barracks as well as on missions to Chad and Kosovo – where the St. Patrick’s Day riot occurred in 2004, during which 8 Irish soldiers were killed. He plans to be based in Mali next year. Kieran is trained in finding improvised explosive devices, web designing and has also completed a sniper course. However, during his career he has also been asked to count forks and cut the grass!
The lieutenant and corporal outlined briefly what is involved in membership of the army. Their main job is to visit countries during times of conflict to make the area secure and to give a sense of safety to the people living there. In particular the UN peacekeeping forces are desperately needed when a country cannot manage itself and is in complete turmoil. Both Claire and Kieran confessed that they have seen a lot of good and bad things during their time in the Defence Forces and, even though they know their life is in danger on every mission, they are happy to do it again and again

Presentation of the UN flag

To finish off the visit, our school was presented with a United Nations flag to mark this visit by John Lynam, Claire Foley and Kieran McGeogh. The flag consists of a map of the world which represents all the people and countries of the world. The map is supported by two olive branches which symbolise peace- a priority in the UN itself. The flag shows us that we should have peace in our school, just like we strive to have peace on earth.

I’m sure our students can agree with me when I say that this visit was exceptional and undoubtedly rewarding. Each speaker was extremely informative and our students left with a new knowledge of the people who represent our country. On behalf of the students of our school, I extend a sincere thank you to Consul General John Lynam, Lieutenant Claire Foley and Corporal Kieran McGeogh for bring Global Ireland to our community in Scoil Mhuire. 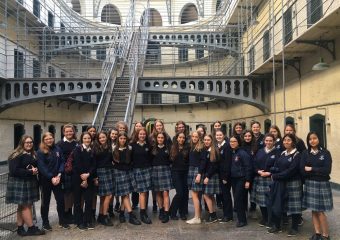 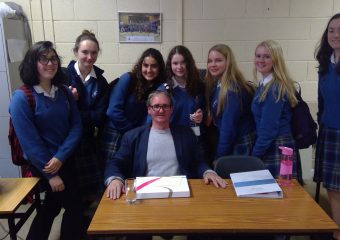 On the 23rd October, we had the pleasure of...
Read More

We use cookies to ensure that we give you the best experience on our website. If you continue to use this site we will assume that you are happy with it.OkPrivacy policy